“If we were engaged, and I broke up with you, and later invited you to my wedding to another man, would you attend?”

“No!” My husband gives me a horrified look. “Why would I want to do that?” i

Exactly, I gloat. “It’s a popular trope in romance novels, although it’s usually the heroine who got dumped. Usually, she arranges a date for the wedding with some random guy and end up falling in love. I’m reading one of these now and I’m thinking, who does this?”

Maybe I should take a poll on Twitter or Facebook or something. Maybe I’m in the minority here.

The heroine’s reasons are numerous: She doesn’t want her ex to think for one minute that she’s not over him. Is she? She doesn’t want his new fiancée to gloat because of her absence. Who cares? Her parents and the ex’s parents are BFF’s and they’ll discuss her psychological state ad nauseam if she doesn’t attend. Again, who cares? Her mother (a psychologist) has already called three times to discuss the need for closure and why she must therefore be there. Ah, there’s nothing like parental pressure… 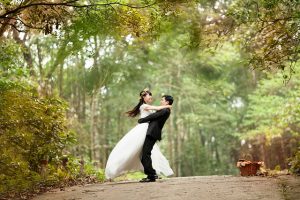 Image by toanmda on Pixabay

This book is by a bestselling author, but I’ve already been pulled out of the story because I can’t buy into the premise no matter how good the heroine’s supposed motivation is. With every page I turn I’m thinking, isn’t she an adult with a mind of her own? Why is she doing something she doesn’t want to do? Who’s she trying to please/placate and why? Bottom line? A few pages into Chapter Three I’m already disappointed with this heroine.

Your ex-fiancé/fiancée who dumped you has invited you to his/her wedding. Do you attend?

Those who said yes, were the most likely to respond with a comment. Some would go out of curiosity or because they were still friends with the ex. Others were willing if they had a gorgeous date or had a hope of meeting one there.

Did I finish the book? Yes. As it turned out the ex’s wedding was only a small part of the story, but it served to get the hero and heroine together and led into much of the back story for why our heroine behaved as she did.

But I think what I’d rather read in this trope, is a heroine who attends an ex’s wedding willingly and isn’t bothered by the fact that she’s still single and has no date. Maybe she could meet someone there. His brother? Best friend? Boss? Maybe she could be the life of the party at the reception. There are just as many opportunities for awkward moments. Maybe I’ll write that one. One of these days.