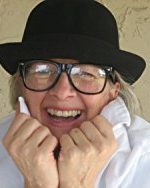 AJ Tillock is my alter ego who writes a screwball fantasy series entitled Grinding Reality inspired by my years as a part-time coffee store barista . Baristas don’t make a lot of money although the benefits are great. After several years I began to think, how can I make money from working here? What if I wrote about it?

I joked that my apron could turn into a superhero’s cape. One day I sat down in a coffee store and started writing “what if?” scenarios and came up with the idea that a frustrated coffee store manager finds a hidden bag of magic coffee beans. Tee Rutledge accidentally swallows one and within 24 hours the majority of her thinking rational self is transported into the body of another entity. In the first book, The Forbidden Bean,

her first experience is in the body of a biting fly. She thwarts a near date rape. She’s then zapped back into her human body but retains the after-effects and memory of her experience. But her human body that’s left behind while she’s temporarily “gone” operates on a sort of auto-pilot. she functions automatically but she has no memory of what that auto-pilot part of her did while she was “gone. Things have happened and she’s made plans she has no memory of. And that gets her into trouble. Plus she is confronted by what she’s witnessed or overheard and is compelled to right injustice she wouldn’t know about otherwise. The beans are addictive. She has to have one every seven days or experience unpleasant side effects. And every time she swallows a bean she temporarily turns into something else. She has no control over what, when or how or when she’ll return to her human body. She doesn’t want to tell anyone because they’ll think she’s crazy.

The overriding story arc is that there’s a group of Albanians she and her fellow coffee store team have dubbed the Espresso Mafia. They always have wads of cash but they never seem to work. They are rude and disrespectful and Tee is suspicious of them. When she sees a woman who’s clearly been abused by one of them, she decides to find out what they’re doing because she’s convinced they’re criminals.

The other sub-plot is her father who long-ago abandoned the family (or so she believes) comes back into her life as a shadowy figure who warns her away from pursuing the Albanians. This only makes her more determined to find out what they’re up to, especially if it means increased visits from the father she’s never known.

In book two, Cool Beans, we find out what happens when Tee tries to break her addiction to the beans.