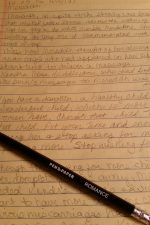 Meredith, in spite of the steady fall breeze that whisked fallen leaves across the withering grass, kept her gaze on the white marble headstone. Small, as befitting the tiny one it commemorated with a sweet angel on top.

That’s how Meredith thought of her almost-baby—as an angel who had appeared in her life for a short time to deliver a message.

Kendra Rose Huddleston, who died before she was born’s message to Meredith was simply, “Stop.”

“You have a daughter, a healthy child, a wonderful child, which is more than many women have. Cherish that child. Treasure that child. Put your time and energy into raising her and stop asking for more. Stop expecting more. Stop wishing for more.”

Although the longing for more children had never completely gone away, Meredith had heeded Kendra Rose’s advice. She wasn’t meant to have more than one child. If her previous miscarriages hadn’t sent that message loudly and clearly, Kendra had.

No more pregnancies. She and Ken were in agreement about that. As were the doctors. A tubal ligation had sealed her womb.

Even adoption, which she and Ken had discussed once upon a time, seemed equally as greedy. There were so many childless couples who deserved at least one child. For her to take one seemed selfish in the extreme.

“But look what we can give a child,” Kenneth had argued, even though she sensed his heart wasn’t in it. He wanted her to be sure about closing that door. Even if it meant he’d never have a son.

Meredith bent to remove the weakened stems and wilted petals of the white roses she’d brought on her last visit from the permanent vase that was part of the headstone. She’d brought red roses today which she carefully arranged with the greenery and babies breath.

“How are you today, baby?” She often talked to Kendra here in the peaceful corner of the cemetery near the white-steepled Episcopal church. “Your sister’s getting married. Can you believe it?” Meredith blinked back a few tears. “I can’t.”

But it was happening anyway. Her beautiful, smart, talented daughter would soon be married to a man she hardly knew and whom Meredith had never met. In a few months, Meredith would be a grandmother. God willing.

Meredith stepped back. The red roses contrasted nicely with the white marble and brightened up the cemetery which seemed to be hunkering down in preparation for winter. There’d be another influx of flowers and flags come Veterans Day, but between now and then? There’d be few visitors.

She had so much to do. A list of not-yet-done wedding tasks was, at this moment, tucked into the side pocket of her purse, not so patiently awaiting her attention.

Still Meredith took her customary seat on the bench not far from Kendra and closed her eyes. Just a moment she promised herself. A moment of peace. A moment of prayer. A few minutes to live in gratitude for all the things she had and to try once again to let go of the longing for things she didn’t.

The wind picked up, forcing more leaves to strip away from the trees. Meredith pulled the collar of her fall coat up and opened her eyes.

I wrote the above on Christmas Day, 2016, after my friend Cathy gave me a package of pencils as a Christmas gift. I haven’t written my fiction projects in longhand since I got my first computer, but I decided to give it a try. There’s something about writing with a pencil and paper. It’s certainly a slower process, but maybe that’s a good thing. It forces a writer to slow down and think about what’s going on the page. This is a rough draft. Watch for White Roses in Winter which will available just as soon as I finish it.