When Dad Was Sick – Part Seven 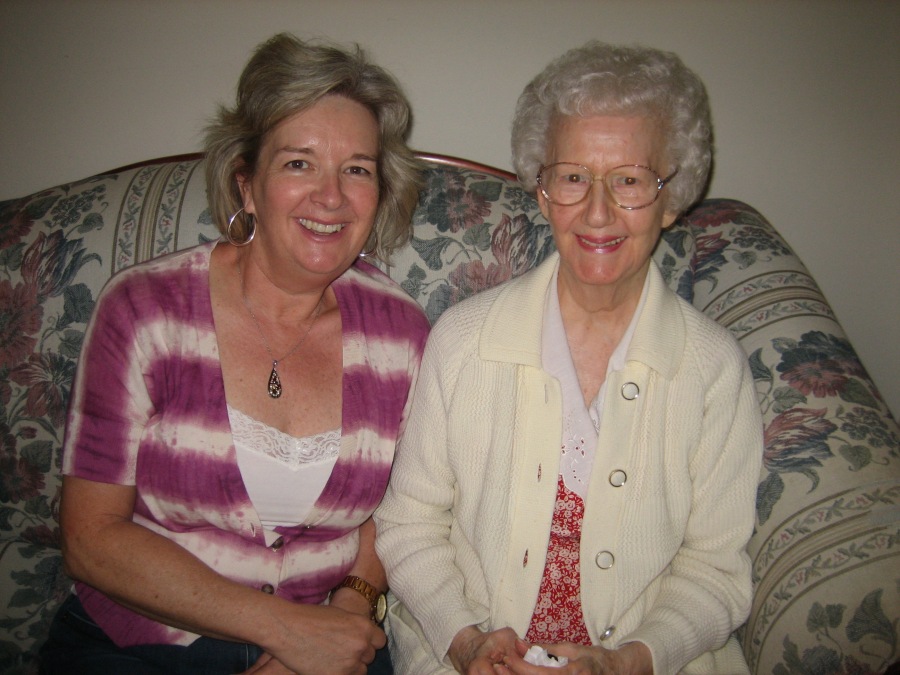 Me and my mom

7/6/08 Seriously, who takes someone else’s terminal illness and makes it about them?  My mother, that’s who.

Dad didn’t have such a great day.  Slept a lot, pain bad, didn’t want to eat once we got some breakfast down him.  Mom was tired so she wanted to go to bed early, like 6:30, quarter to 7, but she was concerned that Dad hadn’t eaten all day.  I told her when I got him up to take his pills at 8 that I’d try to get him to eat something.

Steve and I were sitting on the back porch and Steve heard Dad go into the bathroom, so I knew he was up and it was about 8, so I went in to get his pills ready.  Mom was standing outside the bathroom door with her head down on top of the laundry basket that was sitting on the dryer.  I asked if he was okay and I guess he was.  So I went and got his pills and when he came out I asked if he wanted something to eat and I don’t think he really did, but he agreed to eat cookies and peaches.  So I put it in a bowl and he wanted milk and I got it for him.  He sat down at the counter and Mom sat down, too.  When he was done pouring the milk, I went to put it back in the fridge because I was standing right there.  Mom gets up, pulls her chair out and leaves and says, “Here, Barbara, you come and sit here and take care of your Daddy.”  She walks off in a huff.  I’m like, oh shit, we’re in trouble now.

So Steve and I discuss after Dad goes on to bed about leaving them alone, letting them deal with each other.  I’m so sick of Mom at this point anyway.  Sandy called and I talked to her.  Sandy says, but Barb, your mother’s not right in the head.  Yeah.  Whatever.

So they got up again when I was watching TV, about 9:30, I guess, and I gave Dad some liquid morphine.  Back to bed they go.  I go in my room and later I can hear him coughing and them talking, but I think, no I won’t go in and help, let them deal with it.  I went out to go to the bathroom (I think) or maybe I heard something different and when I went out Dad was on his knees by the nightstand and the bed.  He’d lost his balance trying to get up and go to the bathroom.  He got back in bed and I left.  I thought, well, he hasn’t been to sleep so he must be restless.  I went out and put some Ativan in the cup and left it on the counter.  I went back to tell him it was there if he needed it and he wanted to take it right then, so I went and got it and some water.  Mom says, “There’s water there on the nightstand.”  But I didn’t know there was, so I had brought his glass out of the freezer with water in it.

So he takes the Ativan and I say, do you need to the go to the bathroom because you didn’t go before.  He decides to go.  I don’t touch him, don’t help him at all, except I tell him to go to the bathroom across the hall because I thought Steve was in his bathroom.  So he goes in there by himself and I wait until he comes out so he can see to get back in bed and get his oxygen thing on, and all I do is hand it to him.  And Mom’s laying there in the other bed and as I’m walking back to my room, she says, “I guess Barb helped you to the bathroom.  I can’t even do that right.”

Oh, frickin woe is me.  I stuck my head back in there and I said, I didn’t help him to the bathroom, he got there all on his own.

He’s dying and it has to be about her.  It’s NOT ABOUT HER.  WHY DOES SHE KEEP TRYING TO MAKE IT ABOUT HER?  It takes a certain kind of selfish self-centeredness to make his illness about her.

Okay, I sort of get, I’m infringing on her territory.  I’ve “usurped” her position as female head of household.  I come in guns blazing, trying to get things done and she doesn’t like it.  She resents it.  I can’t help it if she can’t see to give him his medication.  I can’t help if she doesn’t understand half of what’s going on.  This isn’t my fault.  I did not give him Stage IV lymphoma.

I can’t tell her what I think of her because it would just cause more stress and tension in the household and that wouldn’t be good for my dad.  But I’d really like to slap her upside the head and say, “THIS IS NOT ABOUT YOU.  HOW DARE YOU TRY TO MAKE THIS ABOUT YOU!”

Selfish, selfish, selfish.  It’s appalling.  I’m so amazed that I never saw her this way before.  I just never realized how self-centered she was.  I knew I didn’t like her, didn’t enjoy her, didn’t like being around her.  I never really did, though God knows I tried at times to have some sort of relationship with her.  She was a horrible mother.  Really.  She could never let anyone be who they are.  Who you were was never good enough for her because it wasn’t ever who or what she wanted you to be.

I am so sick of her shit.  I was thinking if I really start to lose it, I can go and get a hotel room in Springfield until I leave on Friday.  But why should I do that?  Why should I deprive myself of the last few days with Dad.  Screw her and her self-centered bullshit.

I’m done here.  You can bet she won’t be getting much help from me in the future.  I’m off the case.  She can be someone else’s problem.  I’m done with her.