Home hospice When Dad Was Sick – Part One

When Dad Was Sick – Part One

6/26/08 As excerpted from a journal I kept while my Dad was dying from Stage 4 lymphoma. Even though he’d been under the care of an oncologist for lymphocytic leukemia for years, Dr. Carter denied that Dad’s severe headaches were caused by the leukemia and apparently never tested him for anything else. Even after Dad’s diagnosis (he was already at Stage 4), Dr. Carter prescribed Vicadin for him which Susan, the hospice nurse claimed would not have been effective for the kind of pain Dad was suffering. A week or so prior to this, when I questioned Dr. Carter long distance about Dad’s condition, prognosis, and treatment plan, Dr. Carter refused to discuss the situation with me and kicked my parents and daughter out of his office. Before he died, my dad said, “Don’t blame the doctors.” Oh, but I do. 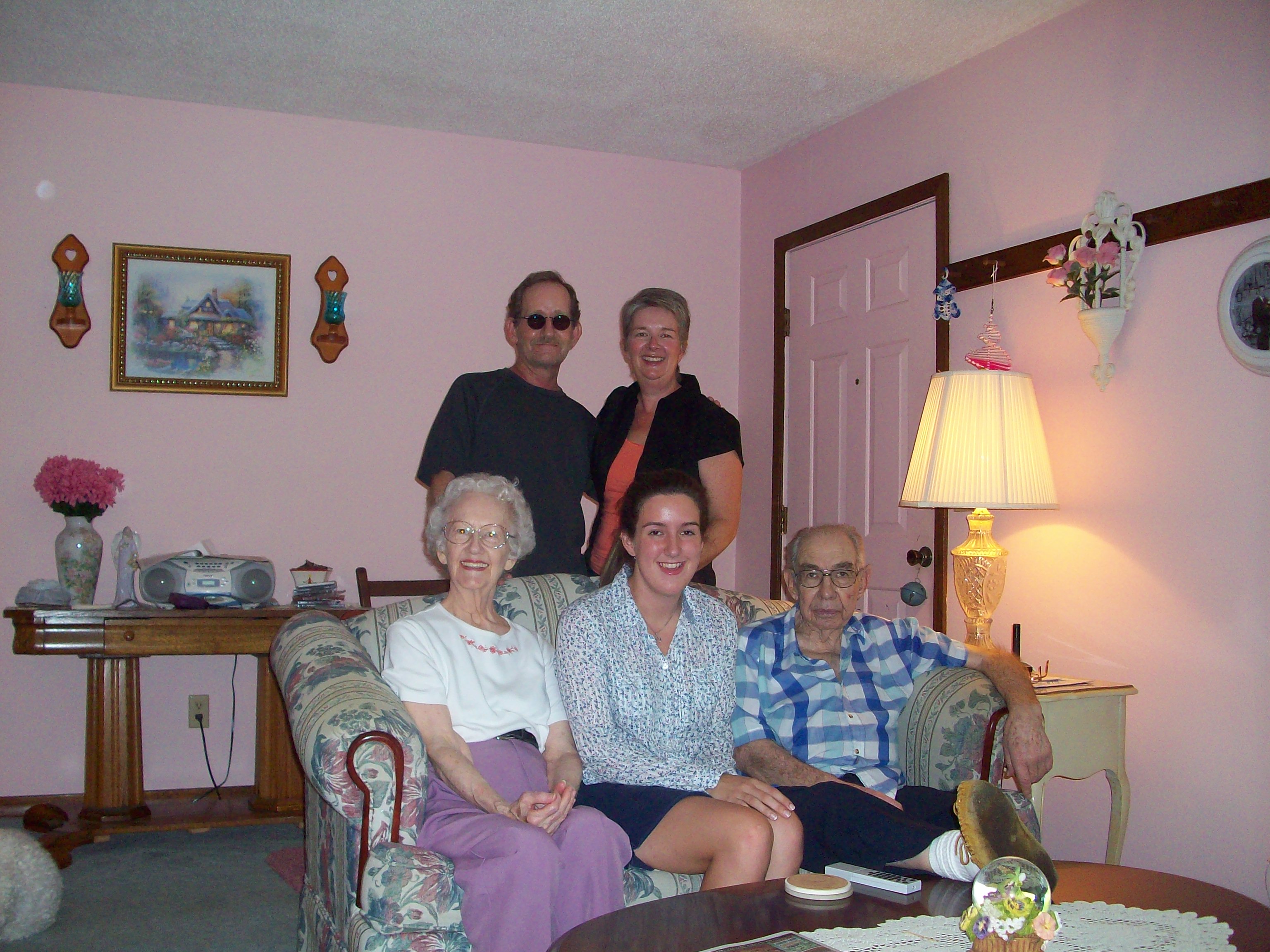 My mom, my daughter and my dad (shortly before he died) in front. Me and Kevin in back.

I arrived here on Friday, 6/20/08 around 6 p.m.  Dani picked me up and we went to eat and then drove from Springfield to Sarcoxie.  Saturday morning Susan, the hospice nurse/coordinator came by.

On Monday we went to see Dr. Sacry.  He was extremely nice.  Dad was sitting in Dr. Sacry’s chair and so he sat on the exam table and talked to us.  We discussed Dr. Carter’s abandonment and behavior.  Dr. Sacry said several things.  That he was surprised by Dr. Carter’s behavior.  He asked if Dr. C. did a needle biopsy.  He suggested perhaps dad should see a different oncologist and suggested Dr. Matthew Miller.  He suggested maybe he could take the catheter out.  So we went back the next morning (Tuesday) and he removed it.  Then his nurse called and said Dr. S.  thinks Dad might have a UTI and we went back for antibiotic.

But now, Dad isn’t exactly incontinent.  He’s peeing on his own and he’s not had any accidents although he wears a guard/pad just in case.  He walks around in his underwear a lot.  Sometimes he’s quite comical, but he’s also frustrated because he’s forgetful and confused due to morphine.  He takes a 12-hour time release morphine tablet (60 mg) 2 x daily and his liquid morphine to take in between whenever he needs it.  Also takes a Docusate, a stool softener.Yesterday I was concerned as his bowels hadn’t moved since last Thursday when he had an accident.  But Susan suggested ½ cup of hot coffee with milk of magnesia mixed in and to double up on Docusate.  That seems to have helped and his bowels have moved since then.  Now we need to back off the Docusate and the stewed prunes because you don’t want to give him diarrhea.  Susan says there are no hospice houses in this area, not even in Joplin or Springfield.  Dad has indicated he wants to stay at home.  Who could blame him?

Dani has a reservation to return to Florida on July 4th.  I am holding off on making a reservation until I can get some things squared away here (I hope).  I asked Dad last night during one of his lucid periods if he wanted me to stay.  He said, “If you’re saying I need someone to take care of me, I know I need someone to take care of me.”  He said yes he wants me to stay.  His concern is what will happen when I leave.

I have talked to Kevin about moving in here and being the go-to guy for their care.  Mom’s memory has deteriorated significantly, IMO.  I think she should be tested for Alzheimer’s or dementia.  It is really bad.

I had a fight with her yesterday morning.  Night before last Dad wanted to turn on the a/c.  I was set to close windows and turn it on and Mom said no.  She said we didn’t need it.  And so, as per usual, Dad backed off and wouldn’t turn it on because she said not to.

Is this not the height of selfishness?  I was so mad.  So somehow the next morning she asked me something or somehow brought it up and she wanted to know what I thought and I said no you don’t because it will just create more stress and that is not good for Dad.  But she insisted.  I made her put in her hearing aids and we went out in the garage and I let her have it.  Dad is sick and uncomfortable.  He couldn’t sleep and it was hot in that room where they’re sleeping.  But because she wasn’t hot and because there was a tiny little fan blowing in there, she said no to his request for a/c.  She said she was sorry about that.  All along since I’ve been here and since Dani’s been here since it’s warmed up she has said if we wanted the a/c on they would turn it on.  But then when DAD wants it on, she says no.

I told her I thought she was selfish and self-centered and that she lives in Betty Jean World.  She said I was a daddy’s girl and brought up how I talk to him on the phone and not to her.  I told her that’s because she never acts that interested.  She claims she is interested.  She doesn’t ask questions because she doesn’t want to pry.  So stupid.  I knew she wasn’t getting any of this and it’d all roll off her back.  I told her I couldn’t stand the way she talks to Dad and the way she nags him.  She says “When do I nag him?”  I mimicked her disgusted, “Oh, A.J.” and how she’s always telling him what to drink and what to eat and how to be and what to wear.  She is clueless.

A couple times she tried to turn it back on me saying wasn’t it the same way with me and Bill and what I say goes.  Ha ha.  Not hardly.  I said why do you try to make this about me?  So you don’t have to take responsibility for your own behavior?

So then we were done.  I was sad at the whole dynamic of their relationship.  Dad gave into her always and he still is.  It was always her way.

As for the gift of his body to the university, that is up to her if he dies first.  What she says goes.