I step outside cautiously, alert for any sign of activity. It’s still dark, but that doesn’t matter. They could attack at any time. They’re always there. Waiting for me.

I look up and see only the porch light, swivel my head from side to side to check every angle. I close the door quickly behind me and turn to look once more. Sometimes they lurk above the door and in the mornings I find a murky, dribbly trail of their waste matter on the beveled glass.

Today I think I am safe enough. My car is parked just a few feet away and I hustle to get inside. In the past I’ve been attacked before I could get the door closed. The memory of the cold, slimy green body touching my skin is still fresh in my mind. I shudder as I start the engine.

They are an alien species but they seem to be everywhere. My husband Joe has declared war on them, but I’m afraid he may be losing. I imagine him going after them in camo gear and night vision goggles. They aren’t easy to kill and Joe has become creative in his use of weaponry. He’s made a spear out of a long pole and carries a military-issue flashlight. Two nights ago he came in triumphantly to tell me of another battle he’d won.

I rarely see him so animated as he described the skirmish. How his foe leapt from shutter to driveway, hunkering behind the fountain. But Joe forced him out into the open and beat the hell out of him with the flashlight before stomping on his lifeless form just for good measure.

“You disposed of the body properly I hope?” I wonder if he can hear the anxiety in my tone.

“It was dark. I threw it out in the driveway,” Joe says. “If it’s still there I’ll deal with it in the morning.”

If it’s still there.

It wasn’t and now I fear the worst. That the dead one’s comrades came to claim the body in the dark of night. That they right his moment are plotting further attacks. Joe is fearless and aggressive when it comes to eliminating every last one of them. “They shouldn’t be here anyway,” he rants. “They’re filthy, disgusting creatures who eat others of their own species. Who does that?”

I silently agree. I want them gone as much as Joe does. As much as everyone else in the neighborhood does. They seem to have no natural enemies, however, except for humans. They’re quick, too, leaping from wall to window to driveway to tree. Their pale green bodies and bulging eyes are the components of my nightmares.

I am glad to arrive at work. I feel safe here, in my office, behind my desk. They don’t follow me here. Not yet anyway.

I have a few minutes before the phones start to ring. I sip my coffee and stare at the newspaper headlines. The words seem to flash like pale green neon before my eyes. The taste of coffee turns bitter in my mouth. If what I’m seeing is true, it’s worse, much worse than I feared. Cuban Tree Frogs Invade Central Florida in Record Numbers 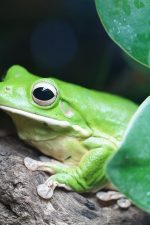