Home Inspiration The Color of Nothing Coming Soon

The Color of Nothing Coming Soon 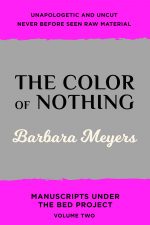 The Color of Nothing is Coming Soon and is inspired by actual events.

Twenty or so years ago, when my own children were teenagers, I looked around for a way to volunteer in my community. I found the Department of Juvenile Justice was looking for mentors for troubled teens. That’s how I met Darla (the name of the character in The Color of Nothing, not the the name of person who inspired the story). At the time, she was 13, and on probation for shoplifting. (Although, according to her, she was innocent of the charge and was only helping out a friend who’d already been arrested once for the same thing.)

I met her and her mother at the juvenile justice office and she and I went to Burger King. Over French fries and Cokes, I learned very little about her. But I am nothing if not persistent.

Over the next year or so, I met with Darla every week. Usually we went to lunch. I did my best to get a picture of what Darla’s life was like, but it wasn’t easy. I learned she knew her father was but had no relationship with him. She had a brother or more accurately, a half-brother who did not live with her and her mother. She and her mother lived in a mobile home park, and Darla had a few childhood friends to whom she was deeply attached and deeply loyal. Trying to get close to Darla was like trying to hug a block of ice.

She often did poorly in school. Seemed to have little regard or respect for adults, although around me she was generally well-behaved. I could see bits and pieces of myself in her. The insecurity. The low self-esteem. The struggle. The belief that no one really cares about you.

I couldn’t get a handle on her relationship with her mother, or on the mother herself. I had minimal interaction with her and found her off-putting. Their home reeked of cigarette smoke. I remember being shocked when Darla told me her mother had gotten married. I later found out it was to a man who (or so it sounded to me) needed to stay in this country.

So many things about Darla’s life didn’t make sense to me, yet I didn’t want to pry. I don’t think she ever trusted me, and God only knows what her mother may have said about me or what either of them truly though of my do-gooder efforts.

Things came to a head when Darla got arrested for domestic violence during an altercation of some sort between she and her mother. She ended up in juvenile detention and her mother refused to do whatever needed to be done to see her released. Of course, I had no standing, which made it hard to get any information at all about what was going on. Finally, a social worker clued me in that because no one would claim Darla for release from the juvenile detention facility, she’d been sent to a homeless shelter.

This happened right before Christmas. Darla was 15. I honestly could not believe that her mother was going to leave her in a homeless shelter over Christmas! I went to visit Darla there and eventually, after talks with her mother and the social worker, was able to give Darla a choice: either she could remain in the shelter or she could come home with me.

The Color of Nothing releases December 1, 2021, and is available for pre-order on Amazon.