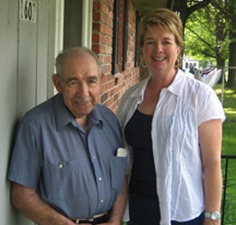 Me and Dad a few years ago

Every Father’s Day I think I’ll write about my dad, but I don’t. There is simply too much I’d want to say about him. I couldn’t fit it in one blog post. So…this might end up being a series of blogs about him.

When he passed away a few years ago my younger brother wrote and delivered a long eulogy. His memories, while accurate, could not come close to capturing who Dad was. I would not have attempted to had I been asked. Or maybe I would have told one story that to my mind perfectly encompasses who my Dad was.

Dad worked in fertilizer plants in various small towns in obscure areas of the country his whole life. He was a social guy. He liked to drink and so did the friends he made, most of whom were guys he worked with. There were a few families we were friendly with over the years. One of those families, the Cravens, I especially remember. They had a daughter named Maureen but everyone called her Mo and I thought that was delightful and cool. Mr. Craven’s given name was Earl, but everyone, including his wife, called him Shorty. Because, of course, he was short. I also found nicknames a delight when I was younger, perhaps because no one in our family had cool nicknames like that. Although Dad, whose name was Alfred Joseph, always went by A.J. Dad wasn’t a very tall person, either. But I digress.

Everyone called Earl “Shorty” except my dad. He always addressed him as Earl. I don’t know how often we visited the Cravens or they were at our house. Enough so I have fairly good memories of them and enough so I began to wonder why Dad never used Earl’s nickname.

I finally said to him, “Dad, how come you always call Mr. Craven ‘Earl’ instead of ‘Shorty’?”

He said, “Because I know what it feels like to be called Shorty.”

Sometimes I wish I’d told that story at his funeral, but it wasn’t really necessary. The people who knew my dad wouldn’t have been surprised by it.

And perhaps that’s where I got my aversion to those kinds of nicknames.