Home Family Sometimes It’s All About The Dog

Sometimes It’s All About The Dog

Sometimes It’s All About The Dog 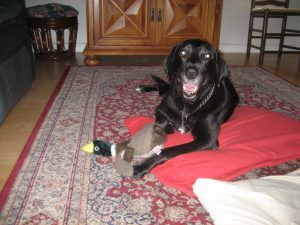 We had our dog Pepper for 15 years. Pepper was a rescue from the county animal control shelter. Her estimated age when I adopted her was under six months. I stood with her in my arms outside the office and called my husband. “Is it okay if I get another dog?” I asked. “You already did, didn’t you?” was his response.

Pepper was THE PERFECT dog for us. She was quiet, undemanding, sweet, and healthy. She had a habit of “dancing” when she stood in one place and prancing when she walked. She was terrified of thunderstorms but other than that, she had zero issues. We were devastated when she died, even though we knew it was time to let her go.

After a speech to my husband about how if he wanted another dog he could have one but he’d have to do all the work because I wanted no part of it, he looked at me and said, “Funny. I was about to give you the same speech.” So we both sort of decided we were never getting another dog.

Fast forward not quite a year later and we somehow begin the conversation about a dog. Bill says he always enjoyed having a dog and did I want to go look for one after my upcoming trip. Somehow, I’m considering it. Maybe we were finally over losing Pepper. If only we could find another dog like her. But that is impossible. How do you replace the perfect dog?

On a whim because I happen to be in the neighborhood, I stop by the local SPCA. I walk down the aisle between kennels where numerous big dogs and pit bull mixes look at me with sad or curious eyes. Some bark insistently. Some don’t bother to bark at all.

And there, all by herself halfway down the aisle is Pepper’s clone. She is smaller than Pepper, but she gazes calmly up at me. She doesn’t bark. She sniffs my fingers. It’s as if she’s channeling Pepper. In the play yard I pet her. The attendant says she’s never heard her bark. I can’t believe how sweet and trusting this dog seems. She rolls over and lets me scratch her tummy. She shows no interest in the other dogs. I can’t believe I’ve found my next perfect dog. 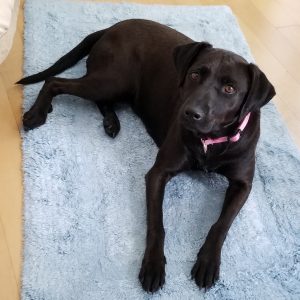 I’ve learned my lesson, though. Even though I want to walk out with her, I go home and tell Bill I’ve found her. He suggests waiting until I’m back from my trip, but I’m almost certain if we wait she won’t be there. We go back to the SPCA and take her out to the play yard again. The next thing we know, we are taking her home.

We have no dog food. No water or food bowls. No bed. No kennel. No collar. The adoption specialist says she isn’t house broken because she’s been an outside dog. But when I took her out when we left the shelter she headed for the grass and did her business. So I have my doubts.

Bill goes to buy the necessities because we probably shouldn’t just leave her alone first thing. He returns with a pink collar and bowls and food and treats. The next day we have to leave for short periods and leave her on her own. She’s calmly waiting for us when we return. She hasn’t had an accident and hasn’t touched a thing.

I want to re-name her, but I can’t think of the right name. Cocoa? Cofefve? Pepper Two? Pepper Mint? Can we just name her Pepper? PC for Pepper’s Clone? Lucky? Because I feel so lucky to have found her. I leave for my trip with no name. Bill says she responds to “Girl.” He and she bond while I’m gone. I’ve had her for two days but I miss her! 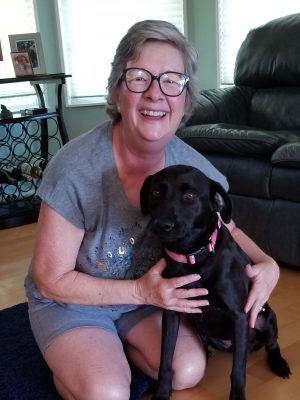 While I’m gone I think of a name. Winner. Because she’s a winner and I picked a winner. But I call her Winnie. “Like Winnie the Pooh?” Bill asks. No. Like Winnie. It’s short for Winner.