This morning I toyed with the idea of making biscuits from scratch. I had some sausage. I had eggs. I had sausage gravy mix. And, miracle of miracles, I had all of the ingredients (but perhaps not the expertise) to make biscuits. 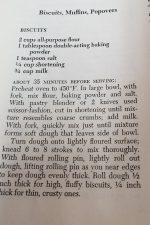 I pulled out my trusty, falling-apart-because-it’s-40-years-old Betty Crocker cookbook and found a recipe. In the back of my head I was watching a friend’s daughter make biscuits many years ago. Hers rose high and were fluffy and I still remember how they all but melted in my mouth. (Had she used Bisquick?) Visions of those biscuits danced in my head as I measured flour and shortening, baking powder and salt.

I followed the directions to the letter. Truly, I did. I didn’t have a 2-inch biscuit cutter. (Who does?) Nor can I visually estimate two inches, so I used a tape measure and discovered a wine glass is about two inches across. Luckily, I have plenty of those. One will do. For light, fluffy biscuits, I should roll my dough ½ inch thick. Measured it. Perfect. This recipe makes 18 biscuits! How will the two of us eat 18 biscuits? 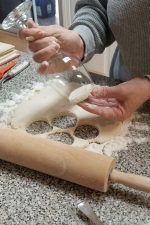 They are ready for the oven. Meanwhile I have sausage cooking. I decide to make sausage gravy from a package I bought quite some time ago. Boiling water is easy enough. I thought it used milk, but it uses only water. The mix goes into ½ cup of cold water and then is added to the boiling water, but as soon as I dump it into the water for some reason I think I’m supposed to be using ½ cup of milk. I carefully scrape it out of the water, measure the milk, stir it up and look at the directions again. Nope. I was right the first time. It’s meant to be mixed with water. Oh well.

In between my own mishaps, I’ve interrupted Bill’s relaxed reading of the newspaper. Once when, I thought I’d set the oven temperature incorrectly (but I hadn’t) and once to prepare a plate and paper towel for the sausage. And several times to take pictures. (My hands are covered in flour and dough after all. I’m creating.) 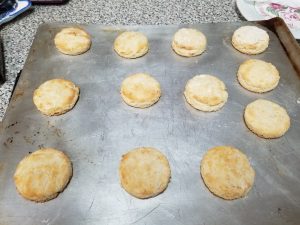 The first pan of biscuits comes out. They are small. No. They are tiny. They are not light and fluffy, but rather flat, crispy and flaky. I pray at the very least they are edible.

We have a saying at our house which comes from a movie, the title of which I forget: You’ll eat it and you’ll like it. The first half of that statement is generally true. The second half, not so much.

The gravy seems thick, though not as thick as I thought it would be. I pile two sausage patties on top of four tiny biscuits and cover it all with gravy. Bill takes biscuits, adds gravy, sausage and cheese, then tops it with another biscuit. It makes me think of the Chick-Fil-A breakfast biscuits. Bite-sized. 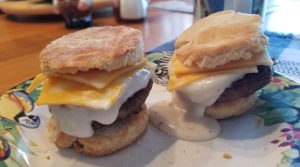 I cut into my first bite with the side of my fork and biscuit and gravy go flying. Between taking photos of my various ineptitudes and cleaning up my messes, I wonder if I’ll ever get to eat my own sad creation. I’m also thinking Bill is, by this point, wishing he’d suggested going out to breakfast. 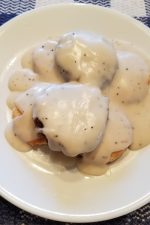 Finally I take a bite. And it’s…not bad. Not bad at all. It’s edible. The biscuits are flaky inside and crunchy outside. Perhaps I should have pulled them out of the oven sooner. The gravy is decent. I didn’t burn the sausage. Overall, for me, this feels like a cooking success.