Home dads Parents Are Flawed Human Beings. Or Are They?

Parents Are Flawed Human Beings. Or Are They?

Parents Are Flawed Human Beings. Or Are They?

Ah, parents. If they only realized how much power they have.

I was never close to my mother. I never thought she liked me all that much. I knew she didn’t get me nor did she want to get to know who I truly was. For years I kept scratching the surface of her, trying to get to what was underneath, trying to understand who she truly was. Until, finally, I gave up. Either there wasn’t anything underneath the façade I imagined she presented to the world, or I wasn’t going to break through and connect with her. I accepted our relationship was what it was.

Besides, I had my dad whom I adored. I could have a real, genuine conversation with him about anything. We had the same sarcastic sense of humor. I truly enjoyed his company. I was 21 the first time he said, “I love you” to me.

I swore when I had kids I’d be genuine with them. I’d hug them and support them and they’d know I loved them because I’d say it often and do my best to show it. I wouldn’t hide behind some image of who I wanted to be like I thought my mother had.

But there were things my parents did that I always wondered about. Why did they never compliment me on anything? Why did they never say I was pretty or smart or that I did X, Y, or Z well? Why hadn’t they ever acted as if they’d cared when I was little? Why didn’t they hug me?Why had I felt so alone and ignored so much of the time? 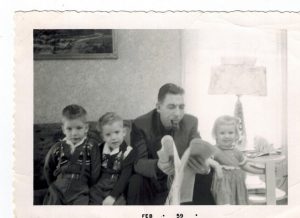 My dad, my brothers and me

Those feeling, I learned, stay with you. Never addressed. Never answered. Never dealt with. Until finally, in my mid-thirties, I did confront them. In a long letter I asked them all the questions I wanted answers to. Their reaction was complete bafflement. They had no idea I’d felt any of this (and why would they?). They didn’t understand where it was all coming from now. And their answer, words I thought were a cop-out until my own children were grown:

“We did the best we could.”

At the time I thought, yeah right. That was your best? Well, it wasn’t nearly good enough. Parents of their generation didn’t compliment their children because they didn’t want them to get a big head. My parents weren’t coddled or drowned in affection so it wasn’t natural for them to extend it. We were made to eat everything on our plate and not waste anything because my parents grew up poor during and after the Great Depression. That’s what they knew.

There weren’t a plethora of “how to” manuals on how to raise children back then. They went with what they knew and did their best. Or as close to their best as they could.

Even though I read all the books and tried to do a 180 on the way I’d been raised, now that my children are grown, I wonder what I didn’t do that they needed. Sometimes all I can remember are all the things I know I did wrong. And I find myself echoing my parents: I did my best. I think my husband did, too. Although a lot of his best was working 50 hours a week earning a living to pay for all the stuff. But that’s how he showed his love for his family. He came home every night. He might have been exhausted but he tried to show up for his kids’ events. Sometimes, all the effort we make still isn’t enough. There’s something we missed. Something we didn’t do. Some need we didn’t recognize.

And in our children’s eyes, we are failures. We failed them.

This is why many parents are so happy their children produce offspring. It’s not just the enjoyment they may derive from grandchildren. It’s so they can look at their kids and say, “Ha ha. You thought it would be so easy. You thought you’d be perfect parents. Talk to me in 20 or 30 years.” 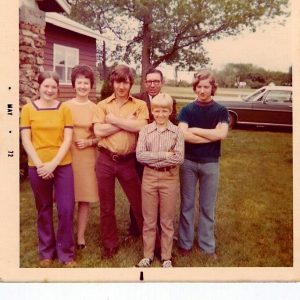 Because we’re not perfect. We’re human. We’re flawed. We haul all the shit from our own childhoods around with us and it can’t help but spill out from time to time. Some of it splashes on our kids and we’re sorry. But we can’t help it. That’s the way life is.

In the end, what can we say? We tried. We loved you the best we knew how. We tried to give you what you needed but maybe we missed a few things. That’s because we’re human. We aren’t perfect.

We’re flawed just like you are. Forgive our shortcomings. And maybe, when your kids are wondering why you didn’t do everything perfectly, they’ll also forgive you.