My dad worked in fertilizer manufacturing plants his whole life. Do you know where fertilizer plants are located? In tiny towns no one ever head of with names like Marseilles. Depue. Soda Springs.

Have you ever visited a fertilizer plant? They are desolate, barren places where gypsum dust is inhaled with every breath and the scent of sulphur hangs in the air.

The dust and the smell permeates everything, including the car you drive to work. So it must have been a very big deal when my father could finally afford a second second-hand car to drive to work. 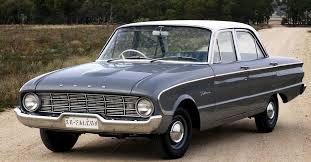 I don’t have a picture of Old Blue but she probably looked something like this. Except she was baby blue.

It was a 1961 Ford Falcon purchased in 1968. I don’t recall how Old Blue got her name, but even today my brothers and I remember that car.

My dad always bought Fords. We had a Galaxy 500 at the time Old Blue joined the family. My mother didn’t drive, so that car was reserved for weekend errand running and the Sunday morning drive to church.

One Saturday night when my parents went out, my oldest brother Steve paid me and my youngest brother fifty cents apiece to wash Old Blue. We innocently agreed not realizing Steve and our other brother Kevin would be driving into town. Steve, of course, did not have a driver’s license and we were sworn to secrecy.

One time my dad was late getting home and I had to be at school for a bus trip to a basketball game. My dad drove me there in Old Blue and because we were late, everyone saw that ancient beat-up car. I was so embarrassed. It never occurred to my dad that I would be. He also never realized, until we told him years later, that Steve and Kevin went joyriding in Old Blue.

The longer my dad drove Old Blue, the more faded and decrepit she became. There was a fine coating of whitish dust on her that never went away. She creaked and groaned like an old woman. The back doors would no long stay shut so my dad tied them together from the inside. I don’t recall now whatever happened to Old Blue. I suspect, when her odometer flipped over for the third time, she had to be put down.

But you will see when you read about Kaylee’s car problems in A MONTH FROM MIAMI that I resurrected a reincarnated version of Old Blue. I refer to this car as “an American make and model that hadn’t been popular when it first came out in the early nineties. Sales had been so poor, and the vehicles proved so unreliable, the design had been abandoned almost immediately. Rick couldn’t remember the last time he’d seen one on the road. Running.”

Old Blue breaks down just as nearly broke Kaylee’s on her way to start her new life in Miami. Rick’s a single dad and a mechanic who needs a babysitter. Just for a month.

Beach read anyone? Enjoy the eBook which is on sale at Amazon and everywhere else right now for $1.99.