Home books Not The Target Audience For Some Books

Not The Target Audience For Some Books

Maybe I’m not the target audience for some books and that’s why I don’t enjoy them. Case in point: I just finished a romance novel (in the name of research) that I’m sure I downloaded for free. Probably because it was advertised on BookBub. It’s by an author I’ve heard of, and my daughter has read some of her books. This author has several books out and is quite popular. Having read just one of her books, I am wondering why. Why is she so popular? Is this what readers want? Or just readers of a certain age. Say between the ages of 19 and 23. I’m so far from that age and maybe that’s why I didn’t enjoy the book. Maybe it’s because I’m a romance writer and I’m hyper critical of romance novels. But…there are romance authors I read and enjoy. Just not this one.

First of all, this book needed better editing. (If it was edited at all.) Repetitive. Redundant. It probably could have been a third of the length had the author not beaten the reader over the head with things that had already been stated and made clear. Annoying.

The word beautiful was probably used 200 times to describe how the hero sees the heroine. Dear author: Get a thesaurus.

Doesn’t anyone get tired of muscled, good-looking, tattooed, angsty heroes? Oh. My. God. He knew he wasn’t good enough for her. She was too good for him. He was incapable of loving anyone. But he’d loved her since childhood. But he could never admit that. He had to stay away from her. But she was so sexy. And so on. New vow: I’m going to start rating romance novels by how many times I roll my eyes while reading them. Please. Just make it stop. 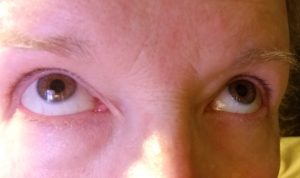 The hero started a business when he was 21. With what we don’t know and are never told because he grew up poor without a mother and with an alcoholic father. But now he’s uber wealthy ten years later. Even though he’s a poor reader and he never writes anything down. Hello? Did he never have to read a contract? Maybe he had lawyers who do that for him.

His big secret is that he can’t read. Or rather, he couldn’t read and he was ashamed. But he hired tutors and now he can read. But still, he’ll never like to read and he’ll never be good enough for the smart librarian heroine.

And the sex scenes. Not love scenes. Sex scenes. Just copy and paste them every ten to fifteen pages. Oh, come on. (No pun intended.) I like a few good love scenes sprinkled into a good romance novel as much as the next reader. These became redundant. But apparently that’s what this author’s readers want. Probably what she’s known for. I could write that kind of book. But I choose not to.

Did I mention that the heroine was a twin? And that she gets pregnant with twins the first time they have sex even though he uses a condom? Happens all the time. 😉

I finished this book but I scanned the last third of it. I’ll never read another book by this author, but it won’t matter to her. Because I’m not her target audience.