Home Not Quite Heaven 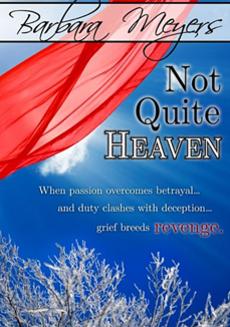 If passion overcomes betrayal…
For Ian and Melissa…
One forbidden kiss is witnessed by a treacherous woman whose dramatic death the following day destroys Ian’s family, career, and future.
After four years apart can Melissa, whom Ian loves, hates and blames for his losses, save him?
and duty clashes with deception…
Forced to work with Ian, Melissa discovers his attempts to overcome his haunted past through a fictional alter ego. Keeping promises of her own means deceiving Ian and risking the tentative bond they’ve begun to build.
then grief breeds revenge.
Four years of loss, resentment and threats culminate in Ian’s own words being used against him.
For a bitter lover…revenge can lead to murder.
If Melissa and Ian survive their own version of hell will NOT QUITE HEAVEN be close enough?

Barb’s Notes:  This is one of those snowed-in together stories, which I see I neglected to mention in the blurb. Oh, my goodness, I knew nothing about writing blurbs back in the day. I’ve ignored this book. I don’t know where else it is available, besides Amazon. Probably B & N. Maybe Apple? I guess I better research that. I loved the story within a story aspect, as we see snippets of the book Ian is writing and how it correlates with his and Melissa’s developing relationship. NOT QUITE HEAVEN is like an old friend I forgot I had!