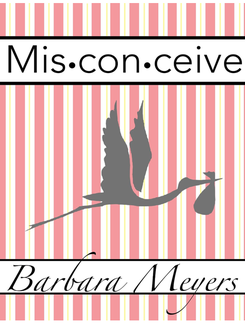 (I’m in the process of rewriting the Misconceive blurb, so bear with me!)

Her husband in a coma. A surprise encounter with her first love. An unplanned pregnancy.

While her husband’s in a coma, Annie’s brief encounter with her first love results in an unplanned pregnancy.

After Jared Donovan dumped her, deeply insecure Annie ran straight into the solid, secure arms of Dan Langdon. If her marriage lacked fire, Dan made up for it by being a loving husband and father.

But when Dan is injured and lingers in a vegetative state, Annie’s life changes drastically. A chance encounter with Jared, leads them into an uneasy friendship and a one-night stand Annie immediately regrets.

Annie also learns that the woman she always believed to be her mother, is not. And finally she understands why this woman hated her.

After Dan dies, the only person Annie confides in is Casey, Dan’s best friend who’s been secretly in love with Annie for years. He proposes that they marry and raise the baby as their own. Together they will weather the gossip her pregnancy is bound to create.

Ten years later Jared’s mother arrives to relay his dying wish: To see Annie one more time. When she sees Annie’s youngest son, she insists that Jared deserves to know about him.

With Casey, Annie finds both the passion and the loving security she always wanted.

An unplanned pregnancy; obviously her husband isn’t the father since he’s in a coma.  What’s a mother to do?

There are many things Annie Langdon doesn’t understand…

Why does a man who professes to love her, dump her after she gives him everything?

A second chance with her first love turns into disaster, but she’s not the only one affected by the fallout.

What did she do to make her mother hate her?

By the time Annie discovers her mother isn’t the woman she thought she was Annie is unknowingly following in her footsteps.

When Annie creates a perfect life with a loving husband and children, why does it all fall apart?

How could she not have known someone was there all along who would help her pick up the pieces?

Misconceive is another story I love. I’m fascinated by these kinds of what would you do? scenarios. In this case, a woman, mother of three, finds herself pregnant after a one-night stand with her first love (who then dumps her before she can even tell him about the pregnancy). Her husband is in a coma from a fall at a construction site so it’s obvious the baby can’t be his. But she can’t in good conscience terminate the pregnancy.

(Yes, I did love watching soap operas with my mom when I was a kid.)

Annie also learns that her mother is not who she thinks she is. And that her husband’s best friend might just be the best thing that’s ever happened to her. When her first love and his domineering mother come back into her life?  Let’s just say if you love books about family relationships and secrets and babies and best friends? Misconceive has it all.