Home If You Dare 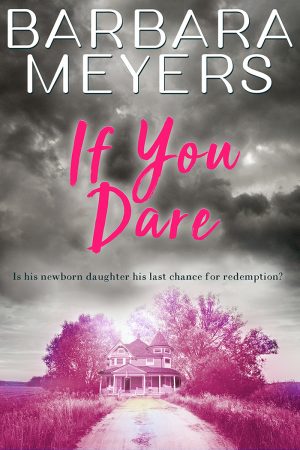 Can a man evolve from arrogant ass to

Father of the Year?

Doug Winston looks into his newborn daughter’s eyes and vows to become the kind of man and father worthy of her. But he first must navigate the mess he’s made of his life.

Doug’s wife has left him. The teenage son he raised despises him, the father he worships disowns him, and a child Doug never knew he’d fathered arrives on his doorstep.

After his baby’s mother dies, her sister, Josie, wants to prove him unfit and attain custody.

As Doug embarks on his quest to live authentically, to make amends where he can and build relationships with his children and with Josie, he discovers that the father for whom he was never good enough is part of a vast criminal network.

Just as Doug and Josie cross the line from hate to love, and Doug has cobbled together the family he always wanted, can he bring the man he once idolized to justice in order to protect them all?

If You Dare was born when my editor (Noah Chinn) suggested I give the character of Doug Winston (who first appears as the antagonist in If You Knew) his own story. My reaction was, “But I don’t like Doug. He’s kind of an assh***.” Noah’s reply was, that’s what will make his redemption so great (if you can pull it off). Editors, like mothers, are almost always right, and I became obsessed with redeeming Doug. I think I pulled it off, too.  Even Noah, as he went about editing If You Dare, said he liked the story.

CHECK OUT THE REVIEWS:

“Overall though, an emotionally gripping read.”

…I’m not gonna lie, I was quite skeptical to dive into this read. After all, Doug Winston was essentially the villain of the first book in this series. So far he’s shown himself to benothing more than a cheating husband, a lousy father, and a ruthless politician. Now we’re supposed to give him a chance as our male lead?

…I went in wondering if I could ever be convinced at his ability to change, but the author of this series completely blew me away in coming to appreciate and love Doug as our main character. The novel opens with him at the absolute lowest possible breaking point in his life. Doug’s actions in book one have left him completely alone, save for a baby daughter who has been unexpectedly dropped into his arms. His initial cockiness has melted away, leaving him emotionally shattered to a point where he literally has no other choice but to change. Doug’s ultimate transformation was both believable and heartfelt in its telling…

At the end of the first book in the series we saw how Doug blew his second chance with the love of his life. He’s determined to make things work between them, but ultimately he’s left without the option of a third chance at love after she unexpectedly dies following the birth of their daughter. Doug is left feeling completely gutted and alone at her death, but sees his daughter, Trinity, as his last chance to put his life in order. It doesn’t take long though before the cousin of his deceased lifetime love comes tearing her way into town, determined to get custody of his daughter…

While I found the development of their relationship to be fantastically gripping, I also found myself even more enthralled by Doug’s personal growth as a person and a father. His efforts to finally make amends for all of his previous mistakes, admitting his errors and vowing to do better as a father was the most compelling part of the tale for me…

I never thought it possible considering who our male lead was for this second book, but hands down this read pulled me in even more than book 1.

Final Impressions: While Doug was our main character, I really enjoyed seeing different chapters of the book being told from the points of view of our various other characters, including Josie, Doug’s son Miles, and his long-lost daughter Liv…

Smut Level: As a massage therapist, Josie knows all of the pressure points and pleasure points needed for an entertaining evening.”
-ROMANCE4THEBEACH

I’m rather surprised Doug was chosen for the spin-off, on account of being a user-manipulator, but people love redemption arcs, don’t they?
If You Dare is the aptly named sequel by Barbara Meyers.  Doug was a villainous character from book 1 who was handed his just desserts, but the death of his lover, leaving him to raise his infant daughter alone, would bring anyone to their knees from the fallout.  Can Doug reinvent himself?
A continued compliment to Ms. Meyers for her writing prowess.  While doing nothing more than depicting the frenetic details of Doug’s sudden catapult into fatherhood, the writing of ordinary sounds are keen and poignant; engaging and fresh, as always.  I felt like a true fly on the wall, forehead slaps aplenty, agog with this-shouldn’t-be-new-to-you-Miles’-father!, but committed to reading the journey I was on, because the writing was so good!  This was the energy she had in the introductory novel, so just kudos to you for keeping me interested, despite the flawed subject.
Keeping me interested — the plot thickens!  When it rains in Red Bud, Iowa, it’s a deluge.  Doug’s past rears its ugly head yet again and demands he step up to meet the challenge.  Forced to grapple with his selfish behavior, we are treated to the reckoning.  It is this introspection, this insight into Doug’s self-recrimination that allows us to heal alongside him.  Because let me tell you:  that initial silent acknowledgement of Josie’s attractiveness rattled my cage – did he learn nothing?!  Who’s Josie?  The ex-lover’s cousin with a whole lot of judgment to heap upon Doug.  Not a spoiler (it’s in the synopsis) and never a worry, Ms. Meyers reeled Doug back in with a crisis of conscience tug.  The evolution of said relationship is much more palatable.  Dare I say, understandable.
Suffice it to say, the aforementioned plot twist is only one of several subplots to keep you affixed.  About 10 chapters in, I did miss the previous main characters.  Ever the diligent writer, they eventually engaged, albeit briefly.  If Doug’s transformation was to be accepted, he had to confront the disasters he created, to justify our reassessment.  Again, the ability to dovetail Doug from insolent to human was heartfelt and believable.
Just when things finally make sense, life in check and love in surplus, the fear of losing it takes on new meaning.  Look at me going on and on.  Read for yourselves and tell me this wasn’t almost better than the first!  Either way, we all win.  I’m ready for your next book.
–THE READING CAFE Reviewed by Carmen
There is no way to put this book down.  In the beginning it feels like you are on a runaway train where the stops are long enough for another surprise to jump on board. By the time the train reaches its destination there is no way to predict who will still be standing when the dust clears.
It is a suspenseful novel like none other I have read. I had to read it all in one night because there was no way I would be able to sleep because I would be trying to figure out what could possibly happen next.
I have never read a book by Ms. Meyers, but I can say I am going to get the first book in this series because I do not want to miss a single page. The characters are vivid and the emotions are crafted in a way where the reader is moved by many emotions; love, hate, empathy, anger, sorrow, and so much more.
It takes incredible talent to make the characters come to life and compel readers to keep reading no matter how early they need to get up in the morning. I highly recommend the writing of Ms. Meyers and the small-town Red Bud, Iowa series.  –Coffee Time Romance & More

Another of my favorite authors has done it again and produced a truly heartwarming story about finding forgiveness, finding family, and finding love again.

Now karma has comeback to bite him. The woman he loved and betrayed twice is now dead due to complications during childbirth and he is left with raising his new baby girl.  With the heartbreak of his loss and the wonder of a beautiful new baby, we see the most despised man of Red Bud become a loving and giving father for the first time not only to his new born baby, but to his estranged teen age son and to his twenty year old daughter he knew nothing about until a few months ago. He also wins the heart of his dead lovers cousin, Josie, which is a feat in itself.

I know the story sounds cheesy and hard to believe, but the writing is incredible and the characters are real and tackling very difficult issues.  Watching this former raging douche raised by a racist pig and a coward of a mother become the man and father he truly wants to be, is an amazing accomplishment.

I absolutely love this sequel to If You Knew. It is an uplifting story of taking your life back and trying to undo the mistakes of your past. It’s about doing what’s right no matter how difficult.  It’s about loving yourself first in order to love others. It’s one of my favorite reads of 2020. Give this book a try, I guarantee you will be moved. Recommend highly!

Thank you to Ms.Meyers for giving me the opportunity to read this book with no expectation of apositive review.  -THE ECLECTIC REVIEW –