Hider in the House. Episode 3 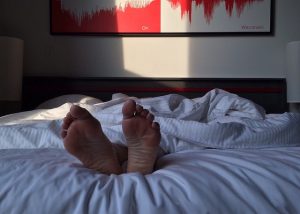 “After you.” My host swept a hand in the direction of the bathroom door and I didn’t see any choice but to walk on through the bedroom, past the rumpled bed to the hallway. I could smell the coffee and my mouth watered. That was one thing I hadn’t had in the two days I’d been here. I’d found beans in a vacuum sealed canister and a coffee maker I could have operated, but I wasn’t comfortable enough to attempt the grinding and clean up to keep it from being noticed.

During the week, Thomas apparently got his coffee at work or on the way because he didn’t make it here. If he had maybe I could have sipped from whatever was left in the carafe. Instead, I’d considered it a small price to pay for the relative safety of hiding in his house.

“Have a seat.” Thomas gestured to the breakfast nook where four chairs flanked a round table.

The next thing I knew, my face was kissing the counter and Thomas was bent over me, his hand at the base of my neck holding me there. I panicked. What was he going to do? Rape me? Slit my throat? Torture me? He’d seemed so…semi-normal. Hadn’t he?

No way was I going down without a fight. He tried to get the fingers of his other hand around both my wrists, but I wiggled and squirmed and he couldn’t trap both of them. At the same time I wiggled my butt back against him. He was strong and solid and he didn’t budge. I could barely bend my legs because I was so close to the counter, but I managed to bring my knee up high enough so I could stomp on his foot. A muffled grunt from him encouraged me. So I stomped on his other foot. He’d let go of my neck to use both hands to hold my wrists, so I concentrated all my energy into my upper body, reared back and head-butted him.

“Ow. Goddammit,” he cried. He released me and I whirled, but he was faster than I was. He had his gun out and aimed at my head while blood poured profusely from his lip.

Visions of my brain splattered across the granite countertop froze me in place. Our eyes locked. While he studied me  a weird kind of energy buzzed between us. I’d been perfectly comfortable spying on him and never seeing him as a whole person. I hadn’t been able to gauge his height or what kind of shape he was in or what he actually looked like. But I’d been pressed up against those muscles and he definitely had a height advantage. I tried to get a sense of him and rapidly revised my earlier opinion which had been based on nothing other than seeing him sit at a desk, and of course, his feet.

He looked formidable. That was a perfect word to describe him. Like a warrior who’d seen battle. His brow protruded over penetrating dark eyes. He jaw was unforgiving. His lips, while generous and well-shaped didn’t appear prone to smiling. Especially now as blood trickled from a split I’d opened with my head. Deep grooves bracketed either side of his mouth. His nose was both broad and slightly hawkish. Even without the gun, he could unsettle her if he wanted to. She decided not to let him.

Not even when he set the handcuffs on the counter. Handcuffs? “What the hell?”

He kept the gun trained on me while he yanked a paper towel off the roll on the counter and pressed it to his cut lip.

“I needed a place to hide.”

“I saw something I shouldn’t have.”

He picked up the cuffs again and motioned for her to turn around.

She fought down the panic. She had to make him understand. “Please. No. Just listen to me. Let me explain.”

“Oh. Excuse me. I’m not harboring a person of interest. One the police are looking for in connection to a murder.”

“If you turn me over to the police, they’ll kill me.”

That stopped him. He stared at her hard. She didn’t flinch or look away. He was her only hope. She had to convince him to let her stay. She couldn’t be on the streets. She had no ID. No money. No credit card. No phone. No one to go to for help. And she couldn’t go to the cops.

“Now why would you think the police would kill you?”

“Because one of them committed that murder.”

“And you witnessed it.”

She held her breath and released it when she saw him decide to back down. For the moment anyway. “Goddammit.” He lowered the gun, tossed the handcuffs aside and picked up the coffee carafe.

Without asking if she wanted any he poured two mugs and handed one to her. He didn’t ask if she wanted cream or sweetener. He’d been better as an absent host. But…coffee. She wasn’t going to criticize.

He pointed to the table as if she were a dog who understood hand signals. He took the seat across from her. She inhaled the nutty aroma of the coffee before she took a sip of the hot brew.

She pretended to relax, glancing away from him, taking in the room as if she’d never seen it before. Although, of course, she’d already explored every nook and cranny of his kitchen and she knew down to the last cracker what resided in his fridge and pantry.

He folded his arms on the table. “Start at the beginning.”

Notice how I shift from first person to third in her POV (point of view). I can’t decide if I can be in her head in first person POV and in his in third. Or if I should do it all in third. Suggestions? Please comment! Thanks for reading. 🙂