Home Barbara Meyers What About This Hair?

What About This Hair? 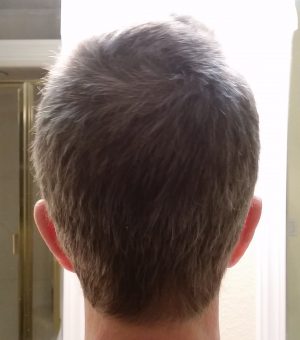 What about this hair? What will people think? I grew up in an era, or at least in a household, where this was the question that drove our behavior. I blame my mother, as I do for most of the situations I endured in childhood and then I turn around and thank her because that’s what made me who I am today. And who I am today is someone who tries very hard not to care what people think about me or my decisions, or my actions, or, for Pete’s sake, how I decide to wear my hair.

I spent a lot of my adult life keeping my hair short. I grew it out a couple of times, then got sick of it and cut it all off. Until the next time I decided to grow it out which was about five years ago. But there are only so many things you can do with your hair no matter what length it is. And my hair can only grow so long (about chin-length) before it just doesn’t look good. So, I’m stuck at that length. And I’ve worn it there for a couple of years, flat-ironed. But for about the same amount of time I’ve toyed with the idea of buzzing it all off and starting over. 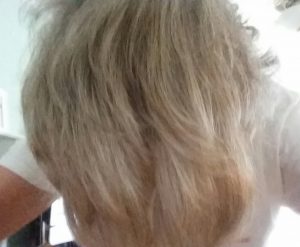 My hair brushed upside down before

So today, that’s what I did. Well, my hair stylist didn’t buzz it off. She cut it off as short as she could with consideration to the two cowlicks I have at the back of my head. My vision of simply shearing it off with clippers the way Samantha did on Sex and the City when she had cancer was what I had in mind. What I ended up with was a little less drastic. I said, “Cut it as short as you can” and this is what I got.

I’m sure the reactions of those “other people” will be less drastic than if I’d gone ahead and done the crew cut. And I fully expect to be judged and questioned and possibly hit on by other women, because that’s what happened before. Of course, I was younger then. And no. I’m not gay. Not that there’s anything wrong with that. And I’m quite capable of fielding unwanted flirtation.

Mostly what I want to do is start over. From scratch. And it’s possible I didn’t get this haircut before today because I wasn’t ready for other people’s reactions. Or maybe I just wasn’t ready. But sometimes I think it’s good to start over, in a sense. To re-evaluate. To determine what isn’t working. To make changes. To lose the fear of what people will think.

In the end very few people really care what you do with your own life. Or with your hair. Maybe for five seconds they care, but beyond that they are too wrapped up in their own lives. We’re so afraid of making a mistake, making the wrong choice or decision and living with the consequences. But almost everything in life can be fixed. Most mistakes can be rectified. Consequences can always be learned from. And hair? Hair will grow back. So tell me: What about this hair?