It’s a Saturday morning at a local writers’ meeting. There are three of us attending. I’ve listened to a fellow writer share her uncertainty about the book she wants to write. The original version included numerous references to God. The reaction she received from agents and editors convinced her to take God out of the book. Now she has two versions. A generic non-God version and a God version. Where does she go from here?

I go on to share that while The World may not consider me successful, I hope in God’s eyes I am a success. He gave me this gift, to be able to write. I believe my inspiration comes from Him. That there’s a reason I’m passionate about what I write and why I tell the kinds of stories I do. I can’t be discouraged by my sales numbers or my lack of writing income. And yes, when The World says you’re a failure because you don’t have a legion of fans, you don’t send out regular newsletters to thousands of followers, you haven’t made any bestseller lists, and your royalty income is laughable, it’s hard not to feel like a failure. 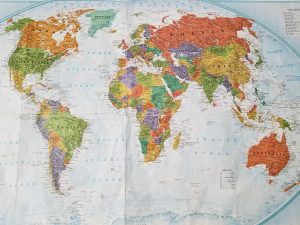 But it’s an age-old story. God vs. The World and its Worldly Things and its Worldly Demands. In the end, what will The World, this world, matter? Will bestseller lists and money and fame be important? Or will it be more important that I followed God’s will for me? That I used the gifts and talents He gave me in the way that I believe He wanted me to? Because in the end who on earth will care what I accomplished? Only God will care what we did.

So I share with my fellow writer what’s important to me and how it keeps me from being discouraged about what I’m doing since I have to live in The World.

I’ve always believed the writing, the publishing of books, the selling of books, might simply be a tool in God’s arsenal.

Maybe we do what we do so He can place us where He wants us. In a meeting, or a booksigning, or on a bestseller list, or with the one person who bought a book, because there’s something we have to say that someone else needs to hear. Or there’s something we need to hear from them.

In the end, we don’t know God’s plan. But since He gave us all gifts and talents, it seems like He’d expect us each to find that thing we’re most passionate about and do it and use it to greater glorify Him without question while ignoring what The World says we should be doing.

So when I say all I want to do is write, that the creative process is what brings me joy, while all those “successful” authors are laughing at me, I hope God is smiling at me. And if He is, I feel I’m a success.