Family Therapy in The House of Dust, Part Two 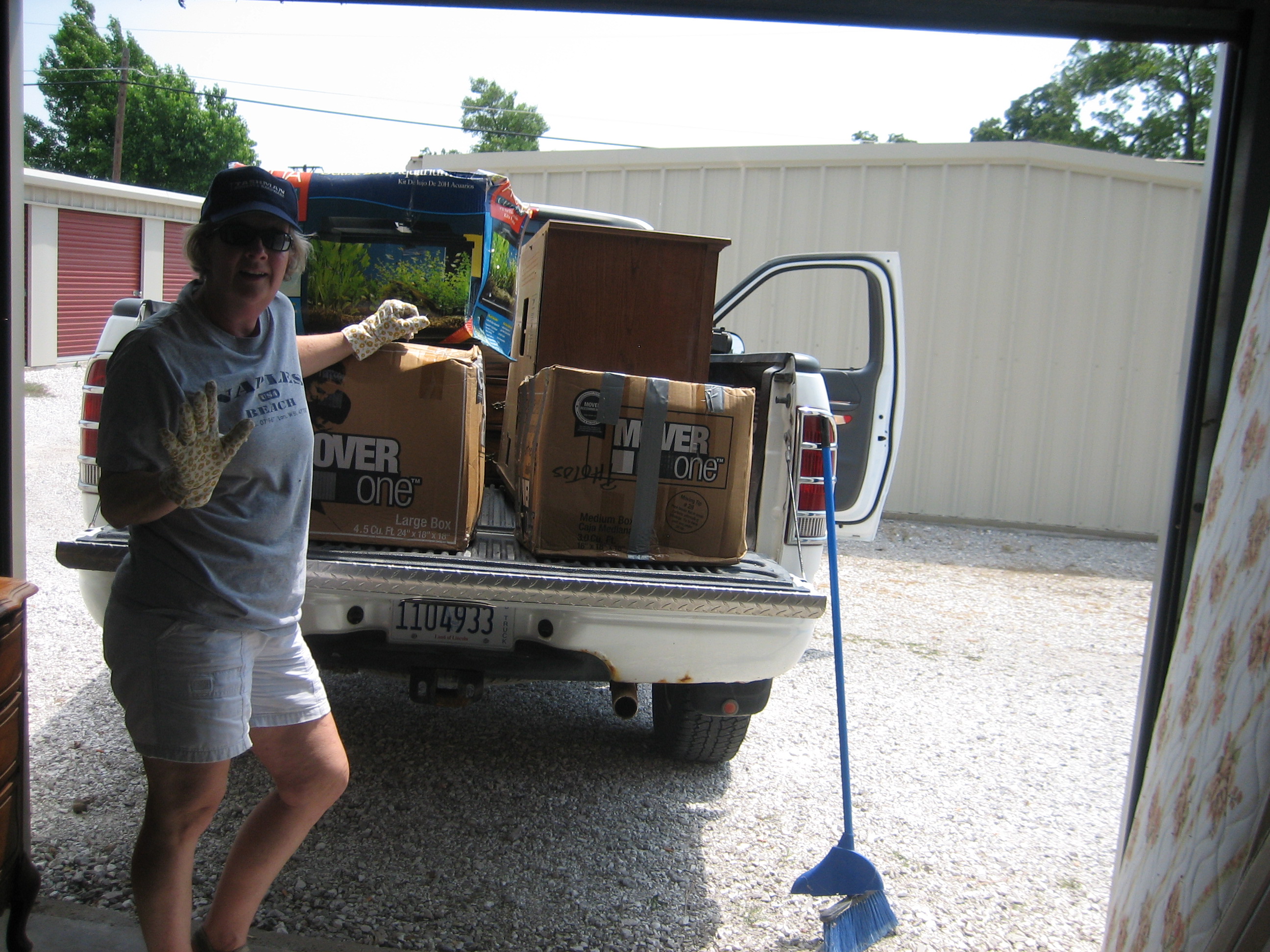 I haven’t seen Scrub or my mother in two years, not since Kevin’s funeral.  We’ve never been particularly close, but we tend to come together during family crises, like when my dad was sick and then died, and when my brother passed away.

Each evening Scrub and I sit out on the screened porch my parents added on to the back of the house and we drink and he smokes and we talk about our lives.  Although he is a bit gruff and lives his life without appearing to regard how his behavior affects anyone else, at his core he is a decent person who would help just about anyone if he could.  He was a rebellious child and teenager but since our dad died I think he’s tried to make up for it by helping our mother, staying in touch with her and overseeing her care.

This trip I learn lots of things I didn’t know about him and the decisions he’s made.  We haven’t lived near each other since we were teenagers so we really only know bits and pieces of each other’s lives.  I guess we are both willing to fill in the blanks for each other.

We have coffee Scrub’s made, but there’s not much to eat in what I’ve begun to refer to as The House of Dust.  I find some instant oatmeal.  Scrub is not interested and makes a gagging sound.  I make a bowl for myself in the microwave.  I eat it but understand his reluctance to partake.

We take a twenty-minute drive to go see my mother.  There are a few residents in the dining room finishing breakfast, but I don’t see her.  All I see are a bunch of white-haired ladies I don’t recognize.  Scrub says that’s her in the green jacket.  Her back is to me, so no wonder I didn’t see her.  I sit down next to her and say, “Hi, Mom.”  She looks at me so surprised.  I tell her who I am and give her a hug.  Then she sees Scrub and wonders why no one told her we were coming.  I say, “Surprise, surprise, surprise,” the way Gomer Pyle used to and hear a few chuckles from the other diners.

We go back to her room, which is like a small efficiency apartment.  She can’t hear very well whether she has her hearing aids in or not.  I mostly  have to repeat everything Scrub says because his voice is so low and he’s not sitting next to her.  It’s an exercise in frustration because she asks repeatedly when we arrived and how long we are staying.  We tell her we will come back in the evening and take her out for pizza.  She loves pizza.

We head back to the house to change then to the storage unit to begin moving stuff.  We discover two dead mice and I make Scrub kick them out into the gravel and hope we aren’t bringing any to the house with us.  There is so much stuff!  Some of it isn’t good enough to move or keep, but what are we to do with it?  We have to unload drawers and cabinets of their contents to be able to get things into the truck.

Trip after trip we make, the few blocks each way, passing the town park and swimming pool each time.  It is opening day for the pool because it’s Memorial Day weekend and they are setting up and tying balloons along the fence.  A gathering for a cookout is beginning to take place under the pavilion.  It’s hot and sunny, the work sweaty and dusty.  I find a hat in the garage and wear it to keep the sun out of my eyes.  I am so grimy at this point it doesn’t matter how long the hat’s been hanging there.  I think I will feel as if I am covered in dust for days to come.

While we are unloading one of our hauls we discover the lawn guy is at the house cutting the grass which is good because it needs it.  He comes over and introduces himself.  He’s a nice guy and friendly.  His name is Paul.  He knows our cousin Louella who owns two empty lots which she inherited from our uncle.  Paul mows them for her.  Louella lives nearSt. Louis.  Before he leaves I ask him if he knows if the garbage people will pick up an old box spring.  He says he doesn’t know but there is a city-wide clean-up happening today and if we haul our stuff down near the city barn off the square, they will take it.  I am overjoyed because there is a heavy useless cabinet we’ve already unloaded that I know we need to get rid of along with a box spring that my parents have kept since my brothers were in bunk beds.  I tell Paul that if he knows anyone who wants some furniture to let my aunt Maxine know.  He’s says, “Really?” as he eyes the garage.  I say, “Yes, really.”  We have no use for it and we’d like to get rid of it.  We’ll sell it cheap or really, someone can have it if they’ll just come and get it.  He agrees old furniture isn’t worth much and when his wife’s grandmother died they had the same issue of a lot of stuff no one in the family had a use for.

Although it’s the last thing we want to do we load the cabinet back into the truck, head back to the unit and load up the ancient box spring and decide to throw away a twin mattress that has seen better days as well.  We find the clean-up and we don’t have to do anything.  They have a back hoe and unload it and toss it into one of about twenty dumpsters.  God again blesses our mission.

After a shower and a very brief nap it is time to go pick up Mom and take her out for pizza.  We arrive at 4:30.  She is waiting for us, but doesn’t know who we are.  She thinks we are Chris and Melonie, my younger brother and his wife who live inFloridabut visited her a few weeks prior.  She and I enjoy a confusing conversation while Scrub goes to check her out.  She treats me like a stranger and tells me she likes living at St. Luke’s and if she has to live somewhere like that this is a good place to be.  She jokingly refers to herself and the other residents as inmates.  Scrub returns and she’s still sure he’s Chris although we’ve corrected her assumption a few times already.  I am Melonie as far as she’s concerned so I don’t argue.

She wants to know where we are going for pizza and we tell her Pizza Hut.  Scrub reminds her she likes Pizza Hut and she agrees.  It’s a short ride from St. Luke’s.

We sit in a booth with me next to her and Scrub across from me.  We order her an iced tea because she agrees that’s what she wants.  That’s what she always used to drink (I thought) but maybe I was supposed to order her Pepsi?  I’m not sure.  The tea arrives and she says it’s too strong.  Scrub says she always says that.  The waitress heads over with a glass of water which I don’t think any of us ordered, maybe Scrub did and I missed it.  Somehow the waitress upends her tray and the water spills all down the front of her.  She goes back for more and I pour some into Mom’s tea and then she says it’s fine.

All through dinner Mom is confused about who we are.  She repeatedly looks at Scrub and says now are you Chris or are you Steve?  We tell her Steve but a minute later she asks the same question.  I lose count of the number of times she asks the same questions.  When did you get here?  How long are you staying?  Are you staying at my house?  It’s comical after a certain point, but also exhausting.

She eats a whole slice of pizza and half of another one and then we’re done.  We head back to St. Luke’s and when we get there she is reluctant to get out of the truck.  “I don’t live here,” she says.  “I live in Sarcoxie.  I have a house in Sarcoxie.”  Steve agrees but tells her she’s lived here for two years.  We go round and round to convince her this is where she lives.  We’ve been gone for an hour or so.  Finally, although she still doesn’t seem convinced we are telling her the truth, she gets out of the truck.

We walk up the few steps to where there are cushioned chairs on the porch overlooking the parking lot.  She agrees it might be nice to sit out here for awhile.

We take our seats and she tells us what a nice place this is and if she has to live somewhere like this, it might as well be here.  She has a friend named Dottie who used to live across the hall from her, but Dottie’s in the lockdown section now because she wandered away one day.  Mom goes to see her often and Dottie is so glad to see her and hugs her and even kissed her one time.  I say, “Did she kiss you on the mouth?”  Mom says, “Oh, no.  On the cheek.”  Mom never did get my sense of humor.

To be continued…look for Family Therapy in The House of Dust, Part Three coming soon.