Home bathroom Difference between the SEXES, Hider in the House

Difference between the SEXES, Hider in the House

On my BarbaraMeyersAuthor Facebook page, I occasionally ask writing research questions and often receive interesting responses. None so much as when I posed this question, however:  Writing research help please. You live alone or you are quite certain you are in your house alone. It’s Saturday morning. You’re in the kitchen when you hear a toilet flush. You get to the bathroom door and it’s locked. What do you do? And GO! 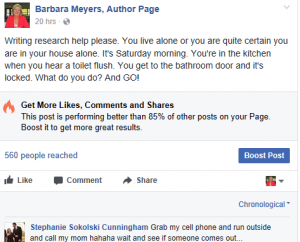 Most of my Facebook page followers are female and I forgot to mention the character who hears a toilet flush when he thinks he’s alone in his house is male. So several female commenters posed the question to nearby males and posted their answers as well. (I had already asked my husband.)

Here is what I noticed about the differences in the responses:

Almost all of the female responders’ first instinct was to flee and call for help.

Almost all of the male responders’ first instinct was to confront/attack. 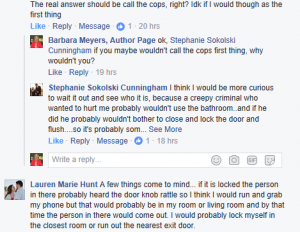 One of the males said, “”Well I would probably have the inner monologue of should I knock or open the door? And then I would end up knocking and saying ‘uh..hello?’ I don’t think I would be scared. (Because who flushes a toilet, that’s not scary or sneaky, that’s just normal.)”

Perhaps this is a result of conditioning in our society. Women are still considered the “weaker” sex and it seems they believe it to be true. Or perhaps, as nurturers, their first instinct is to protect themselves in order to better protect their young. They would look to someone else to “save” them. This explains the popularity of movies like Wonder Woman and Atomic Blonde and others where the heroine is kicking ass and taking names and not waiting around for a man to do it.

I also noticed that men seem to think more logically about the situation. A flushing toilet isn’t a scary thing and whoever is in there isn’t trying to hide his presence, so how big a threat can he be? Nothing the average guy apparently thinks he can’t handle or finds terrifying. Women seem to have more of a kneejerk reaction:  Something’s wrong! I need help!

Below is the start of…something. I wrote this awhile ago and took it out to look at it again which prompted the question I posted on Facebook, because I was stumped with “What Happens Now?” Enjoy! Oh, and come follow me on Facebook!

I had learned to lie perfectly still and to regulate my breathing when he was in the room as he was now. I watched his bare feet as he padded from the closet to the dresser to the bathroom and back. I’ll tell you a secret. I’m kind of in love with his feet. Not that I have a foot fetish or anything, but that’s pretty much the only part of him I’ve seen. Except for the one time I took a chance and peeked out from my hiding place under his bed and I saw him from the back. He was sitting at his desk with his laptop open alternately reading and tapping keys. So I kind of know what he looks like.

He’s got dark hair and he should probably get a haircut. Broad shoulders. I’m pretty sure he works out. He had on a long-sleeved blue shirt and gray slacks. He’s an executive of some sort. He must be or he wouldn’t dress so nicely.

I know his name because for the past three mornings as soon as I hear him leave the house I roll out from under the bed and roam. The first thing I do is use the bathroom because by the time the coast is clear, I’m desperate.

I was a little paranoid the first day because what if his cleaning lady came back? But she didn’t and I’m thinking now she probably only comes once a week. Thank God she was here on Tuesday when the cops were after me and I needed a place to hide. She’d left the garage door open while she took out the trash and in I went. I walked right into the house and I didn’t care if I was unlawfully trespassing or breaking and entering or whatever illegal thing I was doing. I wasn’t even thinking. I was operating on instinct. Run! Hide! Or they’ll kill me.

Under the bed I went figuring the worst that could happen was the cleaning lady or whoever she worked for would find me and I’d have to run. But she didn’t find me. And neither has he.

And now I’m in love with his feet. But who wouldn’t be? They’re the most manly feet I’ve ever seen. No snaggle nails and just a couple of sprigs of hair on his big toes. Nice solid ankles. I bet if I ever saw the rest of him, I might fall in love with the rest of his parts, too.

His name is Thomas. Thomas L. Purdue. I wonder what the L stands for. Lawrence? Litchfield? Lyle? I know his name because I snooped through his mail. I’ve snooped through everything to be honest. His closet. His underwear and sock drawers. His bathroom.

I’ve figured out how to turn on the television, but I keep the sound muted or very low. According to the local channel, I’m still considered a person of interest in the Fleming murder investigation, which means the cops are still looking for me. I’m more than a person of interest. I’m a witness. But the cops don’t want the public to know that. Because Erin Fleming was killed by a cop. And his partner is covering for him. All they have to do is get rid of me and they’re home free.

So until I figure out how to get help while staying alive, Thomas L. Purdue has a roommate.

Being a fugitive is boring. That’s why I snoop through Thomas’s mail. I’ve perused his DVD’s—mostly action/adventure flicks—no porn—which makes me like him even more.  I’ve been very careful to only eat the cans of food I find at the back of his pantry or from places he wouldn’t notice. Who counts grapes, for example? Or crackers? He might notice his peanut butter supply has a sizeable dent in it, but he’ll never guess why. Not as long as I’m careful.

Which I am. I washed my clothes once and I’ve showered twice, but I wiped down the bathroom and threw the towels in the dryer. I’ve borrowed a couple of paperbacks. Thomas’s reading taste runs toward murder mystery and suspense stuff, but at least reading passes the time.

But now I have a problem. Thomas did not get up when his alarm went off because it never went off this morning. He seems in no hurry to get dressed or to leave the house and that is going to be a problem for me because I can’t stay under this bed indefinitely. I have needs. Mainly, I need to use the bathroom. But I can’t. Can I? Not with Thomas in the house. I’m pretty good at a lot of things but I’ve never perfected a method of peeing silently.

It’s Saturday. That’s why he slept in. Come on, Thomas, I silently suggest to him. Go out for bagels and shmear. Hit the gym. Go for a run around the lake. Do something! Please!

Do you know how hard it is to lie still and control your breathing while your bladder is screaming for relief? It’s nearly impossible, but I make myself do it. I concentrate on my breathing hoping to block out everything else. I do this so successfully, I almost miss that Thomas has left the room.  I wait a minute and then I hear him in the kitchen. The faucet turns on and then I hear the whir of the coffee grinder.

I don’t think twice about it. I roll out and race to the bathroom. I ease the door shut. The whole time I pray that Thomas won’t be able to hear me through a closed door when he’s all the way in the kitchen. I’m praying so hard that I do something really stupid. I flush the toilet.

I freeze as soon as I release the lever. It was an automatic reflex for which I will now pay. I stare at the water as it swirls around the bowl and try to think calmly and rationally. But all I can think is what an idiot I am. That somehow I’ll have to make a run for it. That’s assuming I can evade Thomas long enough to escape. That doesn’t seem likely, though.

I whirl when the handle on the bathroom door is tested. Locking the door is the only thing I did right. But it’s a stopgap measure. Thomas can bust the door down.

He wiggles the door handle some more. “What the hell?” I hear him say. He knocks. “Is someone in there?” he asks.

I can hear my mother’s voice in my head. Such nice manners.

I sense movement on the other side of the door. “What the hell?” he says again. Then, “I can see your feet. I know you’re in there.” I jump back, but of course I’m too late. I stare at the bottom of the door and notice for the first time the slight gap between it and the floor.

I sense more movement which must be him standing back up. “Okay, here’s how this is going to go,” Thomas informs me. “I don’t know how you got in here or why you’re in my bathroom. And I really don’t care. You either come out and leave peacefully and we’ll pretend this never happened. Or I’m going to hit send on my phone where I’ve already punched in nine-one-one.” He waits for my reply. “Did I mention the loaded Colt 45 I’ve got aimed right where you’re standing?”

These are my choices: Leave, which I cannot do. Get hauled off by the cops which will be even worse. Or get shot through the bathroom door. Which I really don’t want to do.

I open the door.

I was right about one thing at least, I think, as I take him in from head to toe. I could definitely fall in love with all the rest of his parts.