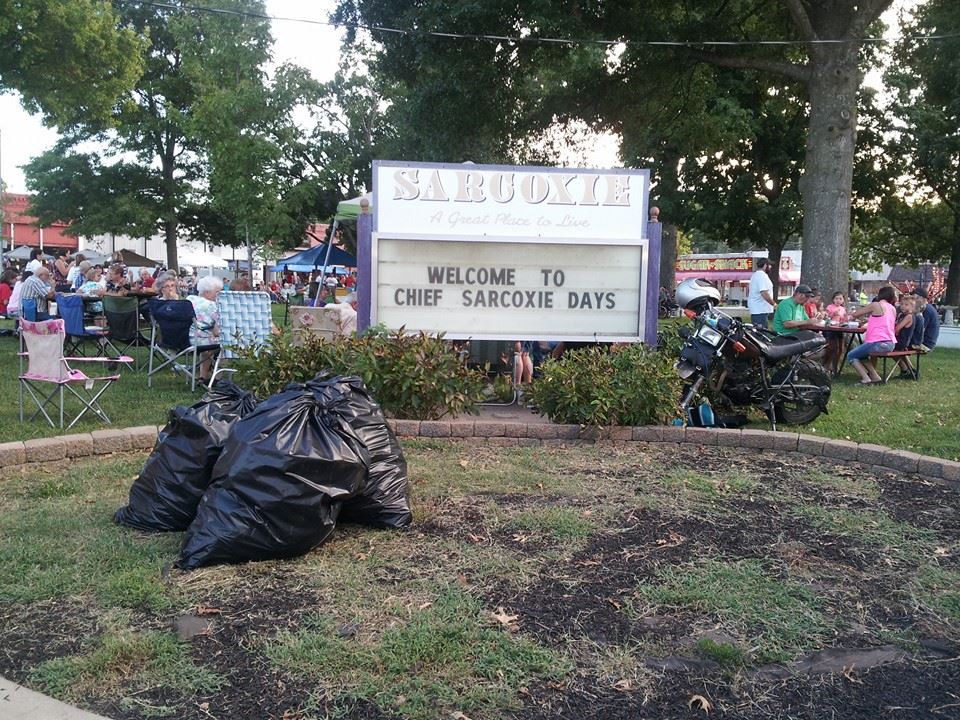 I’m back in Sarcoxie.  Again.  Ugh.  Chief Sarcoxie Days is a celebration, but of what?  Obesity?  Poverty?  Hopelessness?  Am I just used to everything new and bright and shiny so that here all I see is faded paint, burnt out lights and desperation?  Maybe the worn out carnival is a reflection of my mother’s worn out life.

Each day she grows a little sadder, less vivid, less alive.  Eventually she’ll fade away like the memory of a fall street fair on the square.

Yesterday at the home I was shocked by how much older Mom looked.  She “lost” her upper plate so her face is more sunken.  She’d put on pedal pushers under her dress.  At least her hair looked clean.  We walked her down to see “the birds” – caged finches.  Mom doesn’t get out of bed some days.  I’m sure she sees no reason.  She’s weak(er) because of it and I wonder if she’ll make it.  She does, my brother Steve on one side and me on the other holding her hands, my 94-year-old aunt walking on her own just fine behind us.

We’re meeting two other aunts at the Sirloin Stockade for lunch.  When Steve said we were taking Mom with us I said, “Why?” “Because she hardly ever goes anywhere.”  That’s because she doesn’t know where she is anyway or who she’s with.  But I demur.

It’s probably good for her to get out.  It’s a long walk in hot sun from our parking place to the restaurant door and then to the back table where the aunts are waiting.  Steve fixes Mom a plate – fried chicken, mashed potatoes, corn and green beans.  He cuts her meat.  She picks at the food but when he sets dessert in front of her she’s enthusiastic.  The little plate is picked clean in minutes.  I wonder if she has trouble eating due to her missing teeth.  Steve says, “Didn’t you see her chomp right through that cookie?”

We joke about Mom’s obsession with meal times but most of her senses are dulled.  Sight.  Hearing.  Cognitive ability.  All she’s got left are taste and touch.  And there are days, I’m sure, when no one touches her.  There should be an official hugger in her assisted living facility.  Steve says those people there are so damned lonely.  He talks to them when he and Mom sit in the lobby.  I think he’s performing a valuable function.

My mother was not a hugger.  Not particularly affectionate at all.  It was almost as if she was never comfortable in her own body.  She held herself apart.  But now I wish I could pick her up and hug her.  Hold her and soothe her and take care of her.  No one really takes care of her.  Her nails are longer than I’ve ever seen them.  She’s like a Lab, Steve tells me.  She won’t let anyone touch them.

I wonder what her toe nails look like.  Has anyone trimmed them?  She’s always wearing shoes and socks.  Even in bed.  No one’s seen her feet in years.  Steve says, “I’m not touching them.”  My aunt doesn’t seem too interested.  Tough toenails, I guess.

When we arrived to see Mom, she greeted Steve and Maxine like she knew them.  Maxine says, “Do you know who this is?  This is Barbara.”  Mom looks at me, puzzled and possibly pleased and says, “Oh.  My daughter?”

That is the most recognition I’m likely to get from her.  Undeniably I am her daughter with all that entails.