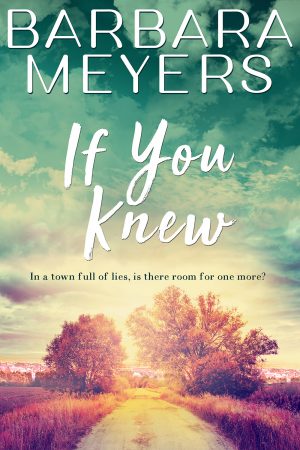 I want to write the third Red Bud, Iowa book (Joy’s story entitled If You Stay), but I’m stuck. Joy is Devonny’s mother (If You Knew) who has been estranged from her family for 25 years. In If You Knew, Devonny suggests she try to reconnect with them, because if she doesn’t try, she’ll never know if it was possible. (I started to write this book in July 2016…)

Joy left home at 18 with a boy her minister father didn’t approve of. Joy and Mike marry in Vegas and arrive in LA. Shortly thereafter Joy discovers she’s pregnant and before she gives birth Mike is killed in a motorcycle accident. Broke, pregnant and widowed, Joy calls home. Her father, Art, says, “You’ve made your bed. Now lie in it.” He hangs up on her.

A bitter Joy turns her back on her home and her family and raises her daughter alone. But Devonny makes some choices as an adult that Joy doesn’t agree with and she finds herself uttering the same words her father said to her. She nearly loses her daughter before she realizes her mistake and makes things right with Devonny. But can she make things right with her parents?

As the story opens, Joy arrives at her childhood home, where her father is about to slam the door in her face before her mother intervenes and welcomes her. Her mother, Marcy, never agreed with her husband’s hard line where Joy was concerned and she is thrilled to have her daughter home.

Joy doesn’t think she was wrong for doing what she did. She was 18, an adult, and had every right to make her own decisions whether her parents approved or not. Therefore, she doesn’t want to apologize to her father.

Art feels Joy disrespected him and broke one of the Ten Commandments to “Honor thy mother and thy father.” He isn’t going to forgive her until she apologizes for disrespecting him. They are at an impasse.

But what does it feel like to try to go home again? Are the other people in her life going to want to reconnect with Joy? Or are they going to hold a grudge for her abandonment of them?

What would it feel like for Joy? After 25 years in LA, is the tiny town of Liberty, Ohio going to work for her? What about her grandparents, aunts, uncles, cousins? Her friends?

I have no idea what any of this feels like. Is that why I’m having a hard time writing it? Do I want Joy embraced with mostly open arms? Or do I want it to be difficult for her? For people to hold a grudge against her? How’s that going to make her feel?

I have Joy meeting Granger Sullivan, a man who had a crush on Joy from an early age, but she doesn’t even remember him. He and his teenage daughter, Cassie, are close to Joy’s parents.

Joy might see Granger making the same mistakes with Cassie her father made with her. Granger might be reluctant to get close to Joy because of his relationship with her father. Joy might resent the close relationship her parents, especially her father, have with Cassie.

Usually when I’m stuck on a story, I just keep writing and let it figure itself out. I don’t know why I’m not doing that with this one.

But I finally decided to stop staring off into space or at the blank screen and just write something. Here it is:

Joy came down the apartment steps in yoga pants and a long-sleeved tee just as Granger crossed the yard to his truck. He stopped momentarily when he caught sight of her but then continued on.

“Good morning,” Joy called in an extra cheery tone just to irritate him.

“Morning,” he returned. He unlocked the truck and stood by the door without opening it, watching her approach.

“I wondered if you could steer me to a reputable car salesman?”

He almost smiled and Joy felt a small spurt of triumph. The man needed to smile. Maybe all he needed was a reas

“Probably, but I need to unload my rental car for something permanent.”

Granger held up a finger, opened the truck door, ducked inside and set his insulated coffee mug in the cup holder. When he reappeared, he began scrolling through his phone. “There’s a guy I know from church. He’s at the dealership out on Route 29. Seems like a straight-shooter. Probably won’t help, but you can mention my name.” He gave her a lopsided almost-smile and looked at her expectantly.

It took Joy a minute to realize what he wanted. “Sorry. I don’t have my phone with me. I was just going for a walk. But I can go get it.” She took half a step away before he said, “It’s okay. We can do this the old-fashioned way. He ducked back into the truck. Joy took a moment to study what she could see of him, while he unearthed a pad of paper and a pen. He wore the same uniform she’d seen him in before. Jeans, work boots, tee shirt, flannel shirt. He could use a haircut, and he evidently saw no reason to shave every day. The scruff worked for him. So did the slightly too-long hair. The penetrating gaze. The reluctance to smile.

So lost in her thoughts of everything that went into making Granger Sullivan work, it took her a moment to realize he was standing in front of her once more holding out a slip of paper.

She took it automatically, feeling a tingle at the barest touch of his fingertips against hers. She wondered if she was blushing. Surely not. “Thank you. I appreciate it.”

He got behind the wheel, started the truck and backed out while she stood there watching him. She tucked the slip of paper into the pocket of her shirt and set off for her walk.

Cassie watched Joy walk away until she was out of sight. She wasn’t sure exactly what she’d seen during that exchange between Joy and her father but she didn’t like it.

She didn’t like that Joy was Pastor Art’s daughter, either. Pastor Art was like another grandpa to her. And Miss Marcy was kind of like her grandma. How dare Joy just barge back into their lives and expect to be their daughter again? And how dare she barge into her father’s life and—and what? Expect to be his—what? Girlfriend? Lover?

Cassie made a gagging sound and turned away from the window. Her dad was too smart to be taken in by an LA phony like Joy Lawrence. Besides, she wouldn’t stick around here for long. Given the choice, who would?