Home A Family for St. Nick

A Family for St. Nick

Her family believes Nick’s a saint.

But Stephanie’s not so sure… 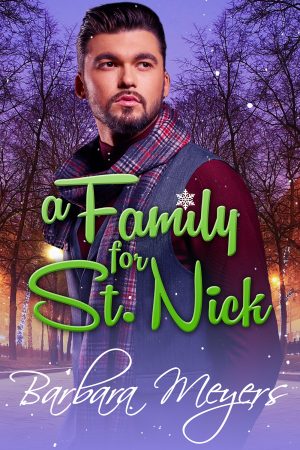 For over a year Stephanie has friend-blocked Nick and he’s had it. An invitation to her sister’s Christmas wedding in Florida is the perfect opportunity to get out of Chicago and get closer to her. But he’ll have to trust her enough to explain why he’s been lying about his own family.

Stephanie accidentally learned of Nick’s family secret, but until he tells her the truth, she can’t consider a future with him. She refused Nick’s offer to be her plus one, but since he’s been invited to the wedding anyway, she reconsiders.

Not only has Nick been hiding something important from her, Stephanie has a few confessions of her own to make. Will ending the secrets between them guarantee they’ll spend the rest of their Christmases together?

This is a short, sweet story inspired by one of my best friends and her family which includes five daughters, two of whom are public school teachers. If you need a quick escape from reality that includes a best friends to romance, holiday wedding, family-oriented story, this one’s for you!